Choir and orchestra of CNT in Zagreb

Lohengrin was the most frequently performed of Wagner’s works during his lifetime. Let us just remind you of the Bridal Chorus, which is performed around the world. Following its premiere, which was conducted by Liszt in Weimar in 1850, the work became almost a cult in elite musical circles in the late 19th century.  In 1893, the famous New York critic Henry T. Finck wrote that “it was the most popular work in the world opera repertoire”. Interestingly, Wagner could not attend the premiere, since he had been exiled from his native Germany due to his political convictions.

“Even though Wagner was ahead of his time with Lohengrin, it marks the end of his development thus far, rather than the beginning of a new development. Therefore, it seems suitable to denote Lohegrin as the final link of the development begun by Weber’s The Freeshooter and Euryanthe”, writes J. Sivec.

The opera is in German with Slovene and English subtitles. 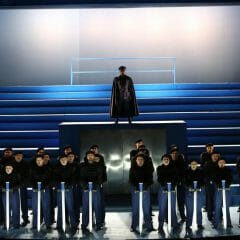