We would like to inform you that new dates for musical Lolita are known. More information here.

In accordance with the recent Ordinance on the temporary partial restriction of movement and the restriction or prohibition of public gatherings in order to prevent SARS-CoV-2 infections (UL RS 155/2020), all Festival Ljubljana events are postponed until further notice. Križanke Box Office is closed, tickets can be bought online. More information here.

The Austrian-Slovene bass-baritone Philipp Kranjc, born in Salzburg in 1991, began his musical training in his native city. Following voice study with Martha Sharp at the Mozarteum in Salzburg and masterclasses with Judith Lindenbaum and Thomas Heyer, he is currently studying under Thomas Heyer at the Hochschule für Musik und Darstellende Kunst in Frankfurt. He has appeared as a soloist in performances of Mozart’s Requiem, Bach’s St John Passion and St Matthew Passion and Haydn’s Stabat Mater in Salzburg, Bonn, Heilbronn and Frankfurt. He has also appeared in the operas the Barber of Seville, Don Giovanni, Cinderella, The Marriage of Figaro and The Abduction from the Seraglio. He performed in Slovenia for the first time in December 2014 with the Nova Filharmonija. In January 2015 he made his debut at the Frankfurt Opera House.

Anna Magdalena Kokits, who was born in 1988 in Vienna, is today considered one of the most promising pianists in Austria. After graduating from the Vienna Conservatory in 2013 in the class of Alejandro Geberovich and winning a number of Austrian and international competitions, she soon gained recognition on important concert stages. Kokits gave a number of well received performances at respected festivals in Austria, Switzerland, Italy, the Netherlands, Germany and Greece, before then discovering her love for chamber music. During the period 2007–2014, she performed regularly with cellist Alexander Gebert at the hall of the Vienna Musikverein. A CD was released to document their path.

However, unknown and forgotten works occupy a special place in her mind. She is currently recording the entire opus for piano by Ernst Toch (1887–1964), a Jewish Austrian composer, the first person to do so, and she is also working on a CD dedicated to Mieczysław Weinberg (1919–1996) for the Capriccio label. 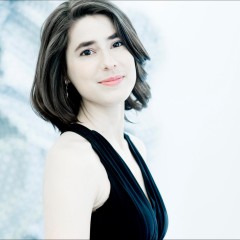